In WWZ the zombies overwhelm Jerusalem by making a human pyramid up the wall.
I was starting to try and work out whether this would be possible given the compressive strength of bone - if a zombie was supporting the at least 16 layers that it would take to top the wall that would be 1,600 k on 2 sq in of femur - but on reflection the real difficulty is that the top layers aren't co-operating, they're behaving rivalrously, and if you just try and climb up each other neither of you can get high. The film's idea is that both of you as you struggle are topped by another, which might be possible if you had a genuine pyramid with a wide base but not, surely, in the upper and thinner levels.
While I'm on the film, the very extreme speed of conversion to zombie would make it almost impossible for them to get on to a plane; the film has one hiding in the toilet, but it's hard to imagine how they would have made it on the plane and into the toilet without zombifying already.  Which would have slowed down the spread.  Boats, too, largely.  Cruise ships would be almost immune if at sea, and if in dock would be taken over and disabled.
I can't see how zombification can spread at much more than running speed.
And that Jerusalem wall - could it have been built in a few weeks?  and if it was, wouldn't it be news, so that Pitt wouldn't have had to hear about it from a CIA man in Korea?

The mcguffin is that zs won't bite (or notice) people with terminal diseases because they want a fit host.  In evolutionary terms, though, biting is a low-cost strategy - wouldn't you bite everything and let god sort it out?  The scientist feed says yes, carrion feeders won't eat sick animals; but eating is a much higher-risk activity than biting.
The fundamental constraint is that there has to be some form of energy conversion to power their movement, and being dead it's hard to see what that is - but if you're going to have zombies, I suppose that's the one question you absolutely have to let go through to the keeper.

Posted by Shithead at 2:02 PM No comments:

Straightening that out by simple extrapolation, that's this: 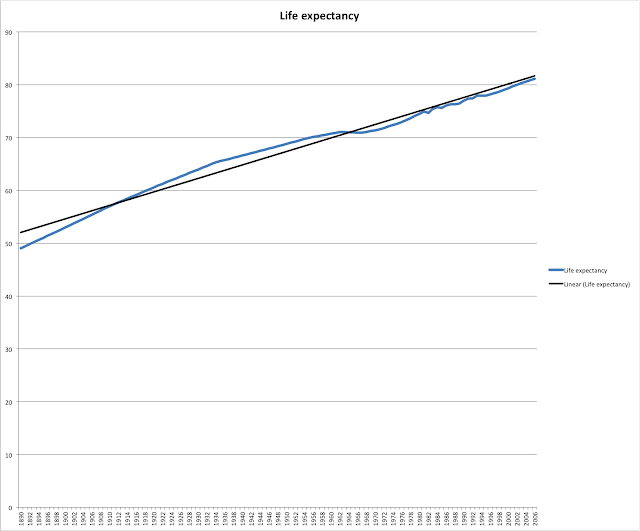 And if you cut back to the postwar period, all the variation (apart from that little dip in the 60s) can be covered by a thick line; 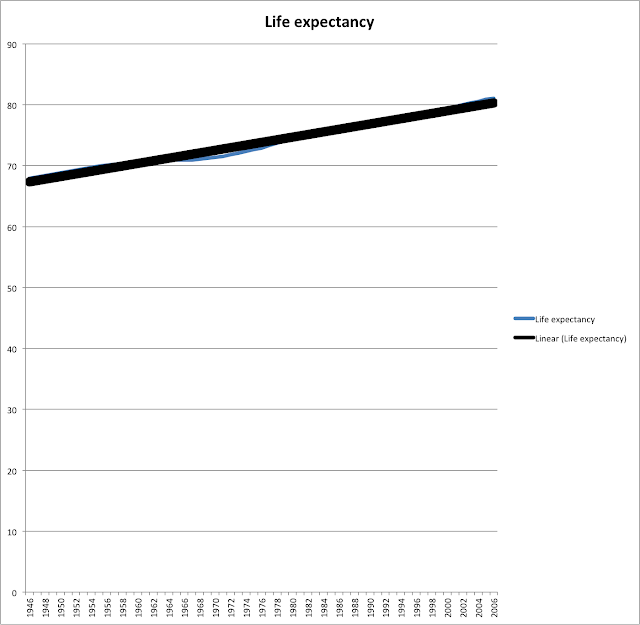 Posted by Shithead at 1:35 PM No comments:

Just for the record, here's the Australian life expectancy graph since 1890, from the ABS - 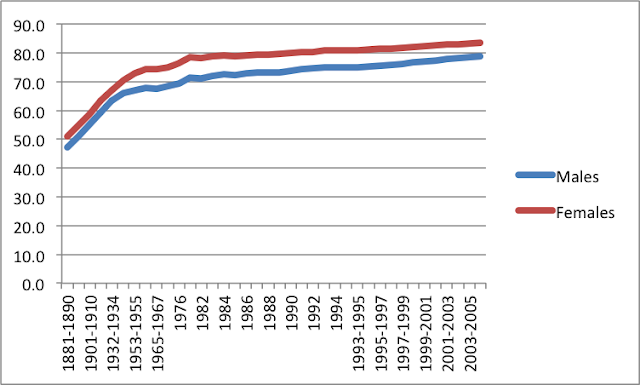 Steady as a ruler, basically, when you stretch out the earlier intervals to their correct size.  Except for a wobble in the sixties, for some reason.

Posted by Shithead at 9:56 AM No comments: 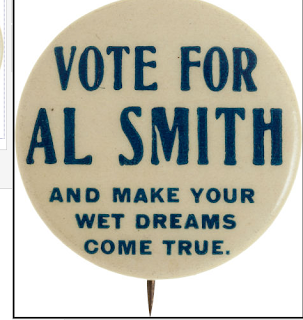 Just been outbid on

I have too many other bids out to go long on this one, which explains why I'm a lousy auction bidder: I spread my money too thin.  I'm essentially a bottom-feeder, trying to catch lucky hits when nobody else bids, which means I really shouldn't expect to get any of the name artists like Capp or Kelly.
Posted by Shithead at 10:32 AM No comments:

Thought I had a chance at his one.
"Clifford Berryman Uncle Sam Political Cartoon Original Art (undated). Terrific political illustration by the legendary Clifford Berryman, image area 14" x 13" and in Very Good condition. Also included is another illustration featuring Kaiser William, by an unidentified artist. This piece has an image area of 13.5" x 18.5" and the art is in Fair condition; the paper is very brittle with many tears and some chips out including a large section in the tree."


The thing being that the other illustration was a signed Thomas Nast.  If I'd been the only person to notice that, I would have got a $1,500 value for about $150. But I wasn't, and some tattletale even peached to Heritage Auctions, raising the bar for everyone:
"Clifford Berryman Uncle Sam Political Cartoon Original Art (undated). Terrific political illustration by the legendary Clifford Berryman, image area 14" x 13" and in Very Good condition. Also included is another illustration featuring Kaiser William, by Thomas Nast. This piece has an image area of 13.5" x 18.5" and the art is in Fair condition; the paper is very brittle with many tears and some chips out including a large section in the tree."

They've still got it as a picture of Kaiser Wilhelm rather than Bismark - Wilhelm would have been impossible for Nast - but that's not enough to keep the price within my reach.

It's still probably cheaper than I'll ever see a Nast again, but it's no longer a gift.