I see we're celebrating the ninetieth anniversary of the charge of the light horse at Beersheba, a great Australian victory. The Israelis, whose land it now is, are joining in the festivities, the Arabs who lived there at the time having moved on.

My grandfather fought in Palestine with the light horse. He wasn't at Beersheba, unfortunately, having earlier got an arm shot off at the battle of Gaza. The people who live around that battleground may not be so keen on commemorating the campaign that took Palestine away from the Turks and gave it to the English, and later the Israelis. It's worth remembering, in the exhilaration of the moment, that the impressive achievements of Australian soldiers in both wars were partly responsible for the present unsatisfactory state of affairs in that region, a fact that may place some responsibility on us to pursue a balanced Middle East policy that's fair to both the people who were there at the time and the people who came later.
Posted by Shithead at 9:07 AM No comments:

cinema paradiso down under

Now there's a documentary I'd love to do. I note from the online search for the Australian National archives that they have available all the bits that were cut out of censored movies in the bad old days:
Title
Brave Eagle [moving images] [television series cuts] [compile] [censored excerpts] : Date of broadcast 1967. 1 of 1 film reels (198 feet, 5 min 16 sec) : positive print with optical sound; 16mm, b&w, sound

All the biggies - Point Blank, for example. What a reel they'd make.
Posted by Shithead at 2:56 PM No comments: 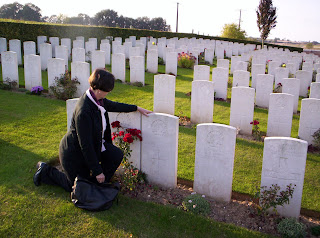 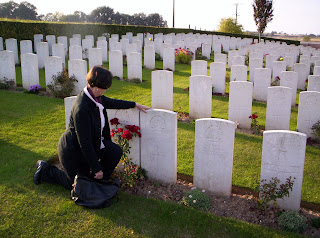 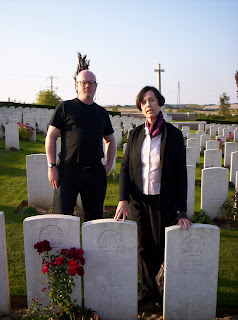 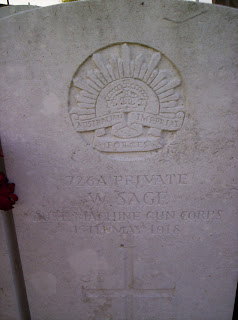 Visiting my sister Sally in Belgium the other day I took the opportunity to visit my greatgrandfather's grave in Ribemont Cemetery (Ribemont-Sur-Ancre, that is, not Ribemont; trap for young players which delayed us rather).

A long way from home. Looking into "Curlwaa: a history, by C James and P Taylor -

Walter Sage was born at Angaston in 1861. He married Georgina Forbes in 1883. She was killed in a buggy accident in 1891, leaving five children.
When was was declared in 1914 Walter tried to enlist, but was rejected because of his age(53). He tried again in 1917, lying a little about his age (he said he was 52). He was in the 6th Machinegun Company; joined the battalion in the field 1/1/1918, killed in action on the Somme front in May 1918, at the age of 57. "Buried isolated grave Preux-Sailly rd just S of Preux and 3 3/4 miles S/W of Albert"... You had to be fairly precise about graves so they could be dug up later and reburied in the war cemeteries, as he was. Still only a small cemetery - there doesn't seem to have been a named battle on that day, it was probably just part of the general friction in the trenches.

He was known, apparently, as "The Father of Curlwaa". Also of grandmother.

Second oldest man in the AIF, I believe. Don't know who the oldest was.

I should have taken a libation for his grave - a ricecake, or some oil, or a chocolate bar, or possibly a live chicken to sacrifice - but I didn't think of it till too late.

Alan (in beret) never to be sufficiently thanked for driving us out there from Brussels.

Nobody likes birthdays ending in zeroes
Except heroes,
Because they encourage you to take stock instead of just indulging in cake and jelly,
And the last person who really enjoyed taking stock was probably Ned Kelly.
As it is you have to come to terms with your parents’ steadily diminishing hope
That you’re ever going to be a footballer or a ballerina or a great novelist or Pope.
No, it’s better to do it the Thai way, because to travel hopefully is better than to arrive,
And they count in sevens and not tens so the big day comes not when you’re thirty but when you’re thirty-five.

Chris B
Posted by Shithead at 2:31 PM No comments: