A minor beatup in the Australian media over violence in Bond movies, based on this article:
http://archpedi.jamanetwork.com/article.aspx?articleID=1476813

The article crappy because its lede is "the most recent film had 250 [violent incidents] compared with only 109 in the first film; more than twice as many acts of violence in total..." without mentioning that of that 133% increase over 46 years nearly half, or 61%, comes in the first year, between Dr. No and From Russia with Love, as in the graph, and 93% in the first four years, up to Thunderball. 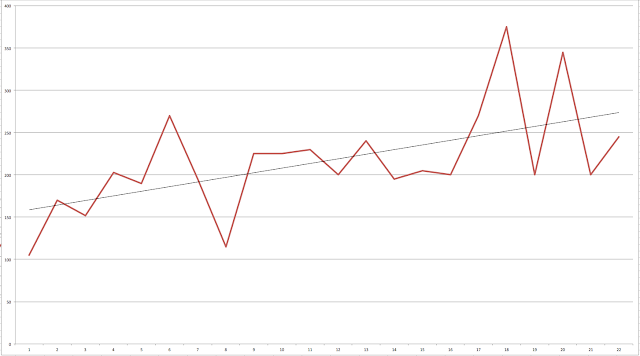 Carried over from comments at Moneybox


A subsidiary question that Jones doesn't address, however, is whether we should be concerned about people opting into less-lucrative careers. It seems to me that having smart, ambitious, hardworking people become lawyers is a huge waste. When Apple and Google compete to produce the best smartphone operating system, consumers win as products improve. But while there's presumably some level of lawyerly incompetence that would be socially problematic, at the margin, big firms getting better and better at suing one other doesn't help anyone. By the same token, it's good to have deep and liquid financial markets, but we're clearly past the point where extra expenditure of engineering talent on devising better and faster high-frequency trading algorithms is anything other than a Red Queen's Race.


Looking at the productivity of lawyers and judges, it's important to consider the statistics.  It's all very well to say that quality doesn't matter, but 500 years of uninterrupted measurement have shown that while if really top talent is involved client satisfaction rates, summed across both sides, can rise as high as 50%, the same transaction could in incompetent hands result in client satisfaction plummeting as low as 50%. Are we prepared to live with that?

I was irritated when the IT genius at MI5 received a laptop from a known computer hacker who has just previously taken over the MI5 computers to turn on the gas and blow up the building and as their first response plug it directly into the mainframe.  Dammit, there would be anti-virus rules stopping agents doing that with any laptop, including their own: for anything suspicious there would be a clean room with no external data access.

That became less important,  though, when I realised that villain's fiendish plot to have himself captured so that his laptop would be plugged into the mainframe so he could escape and run through the undercroft to emerge in front of the hearing room where M was being grilled so that he could run in and shoot M was merely a way to fill up an hour of screen time, given that if he'd done none of it he could have simply walked up to the front of the hearing room and run in and shot M just as efficiently, or not, given that he botched the only bit that actually had to be done right.  Why didn't he run in with a gang of five or ten, or thrown in a bomb, or put a bomb underneath the hearing room, or shoot M while she was going in or out?  Bearing in mind, of course, that he couldn't possibly have known in advance the day and the time when M was going to be had up for interrogation, or arranged for it to be timed to coincide with the inplugging of the laptop...

Which led to the real flaw in the whole thing, the underlying system, which was that everybody at every given moment had to have been been watching the film up to that point.  Perhaps the best example comes towards the eagerly-awaited end where villain sees torchlight across the moors. Aha, he says, there goes Judi Dench. I'll go and chase her while you kill Bond. How does he know it's M ? He knows that Bond and M were in the house, he doesn't know there's an escape tunnel - why wouldn't it be a neighbour, or a hiker?  Or Bond? He knows because we know.  Villain pursues Dench and ghillie (who would have known better than to use unshaded torch, one would have thought) to the abandoned chapel, and just walks in.  Villain knows fugitives were at one point armed, he doesn't know they've put their weapons down, why doesn't he take precautions?  Because we know they aren't armed (for no particularly good reason) and if we know it he knows it.

Returning to minor irritations,
In the fight at the end, twelve thugs walk down to the house (why didn't they drive down?) (and cluster exactly in the only spot where Bond can machinegun them from the Lotus) and are all shot or blown up (by booby traps that would not be sufficiently lethal),
at which point the helicopter lands and lets another nine thugs and villain out - so why didn't they time those to coincide and provide 21 thugs?
so the next nine thugs go in and seven are killed, so the helicopter shoots up the house - so why didn't they do that as step 1, before having any thugs arrive at all? Or have the helicopter drop off a large bomb?
so Bond downs the helicopter, leaving the villain and two remaining thugs, kills one thug and runs off across the ice; other thug, having been told to kill Bond, holds gun on him but does not shoot but instead walks upclose enough for bond to grab the gun (AGAIN for the third time in the movie) and save himself.....

The rooftop chase and the earthmover/train bit were ok, but we'd seen them in the trailer.

And all the reviewers raved about it.  Can't understand it.
Posted by Shithead at 10:18 AM No comments:

Someone on the Conversation leads with his chin.


He says "Many other criticisms of psychology’s scientific status are largely misguided. ... psychology has made myriad contributions to society that most of us take for granted... Psychologists have been on the forefront of advances in advertising, education, achievement testing, political polling, psychotherapy, animal training, airplane cockpit safety, and scores of other domains".  What do any of these have to do with scientific status?

Physics isn't a science because of its achievements in timekeeping, navigation, and inflating balloons, it's a science because it claims to give us access to the way the world is underneath the appearances. It is a successful method of generalisation.

Psychology isn't a science, whatever its achievements in cockpit safety, because all its statistics fundamentally rest on what people say to it; and people are unable to be standardised to the point where they can be meaningfully compared. Specifically, if in a physics experiment the researcher records that their samples fell upward one can be reasonably confident that the outcomes were impossible. If, in the example Scott gives, a researcher tests earthquake victims in Iran and records that the number of people experiencing PTSD is not 25.26% but rather 2.5% or 75.78% then one cannot be confident that the outcomes are impossible. Rather, new hypotheses would be added - Iranians are different, earthquakes are different, researchers are different.

Basically, Scott says that psychology - or at least good psychology, the kind he does - is scientific because it uses scientific methods. The underlying problem, though, is that he can appeal to no criterion to discriminate between two scientifically conducted psychology experiments that produce conflicting results.  There is no underlying structure of theory.

Over the past century psychology, after all, has had two grand theories -- Freudianism and behaviourism - sunk under it, and has replaced them with nothing. The IQ test, its main instrument over that time, has been holed beneath the waterline by the Flynn effect. Scott boasts that psychology has disproved the dictum that opposites attract; this is hardly comparable to the atomic theory or quantum chromodynamics. Where are the important truths?

Even Scott's pretty damn trivial claims tend to shrivel under closer examination. His link for the value of psychology in"teaching language to children with autism' goes not to any articles on this topic but to another general isn't-psychology-wonderful puff piece - probably a good thing, given the extreme weakness of the evidence on ABA in this area (see Michelle Dawson at http://autismcrisis.blogspot.com.au/). He says
Carefully measured personality traits such as conscientiousness are moderately good predictors of performance in just about every occupation; and pathological traits such as psychopathy (a constellation of features that comprises charm, guiltlessness, callousness, and poor impulse control) are consistent predictors of violence and criminal recidivism.
but conscientiousness is a component of performance, not an unrelated variable, and logically has to be associated, while the relationship between psychopathy and violence is almost washed out by the cultural differences in violence rates between, say, Japan and Columbia.

I'm sure psychology has some successes.  It's virtually impossible to imagine an enterprise of that size running for a hundred years and producing absolutely nothing. This is some way, however, from saying that the enterprise was worth the resources that have been put in to it (and are now being put in to it). How many people across Australia should be trained to staff airplane cockpit institutes (etc., perhaps)? Under four thousand a year, I would have thought, which is the number graduating now. And it certainly doesn't establish that the jerry-built 'sprawling confederation' of psychology constitutes a science, or ever could.