Saw, very belatedly, Dark Knight Rises.  Didn't like it, for what almost inconceivably little that's worth.

However, I did have real problems with the cutting-off of Gotham City.  Bane blows all the bridges and traps, he says, twelve million people on the island. That's problematic.

New York has a population of 8.2 million.  OK, Gotham is bigger. But that's greater New York, the five boroughs; Manhattan - the bit that could be isolated - has a resident population of 1.6 million. It depends, I suppose on the day it happens; midweek, there are four million. For it to be 12 million it has to be three times as large as Manhattan or three times as dense. That's not impossible, I suppose -  that's the density of the lower East Side in 1910 - but in a non-1910 environment it's difficult.

By comparison, there were three million people in Leningrad during the siege  there in WW2 and half a million and up died. That was much longer, of course, but it does give some idea of the number of people you need to enforce something like that; a large part of an army group, something like a couple of hundred thousand trained people with tanks.

The problem is the gigantism of the scriptwriter. Four million would have been more than enough - enough, as it is, to starve within a week unless there was continuous boat and helicopter traffic, enough to be uncheckable by the pitifully few gunmen Bane commands.

The problem lies at the core of the superhero mythos (and the Star Wars mythos, with the Jedi) - There just aren't enough of them to make a difference, whatever their powers. But there's no need to make it worse by inflating the numbers.

I did recognise some bits of Pittsburgh.

Posted by Shithead at 7:13 PM No comments:

Saw Despicable Me Tuesday.  Extraordinarily low joke content.  The only interesting thing about it was what I thought would have been a sueable resemblance between the villain/hero Gru and English comic villain Grimly Feendish, which I now see has been observed by Wikipedia;


The character "Gru" in the new movie Despicable Me is remarkably similar to old Grimly in both looks and pose with both tending to wear black with a scarf wrapped around their necks, and both have comic little monstrous minions with Feendish referring to his as "Squelchies". 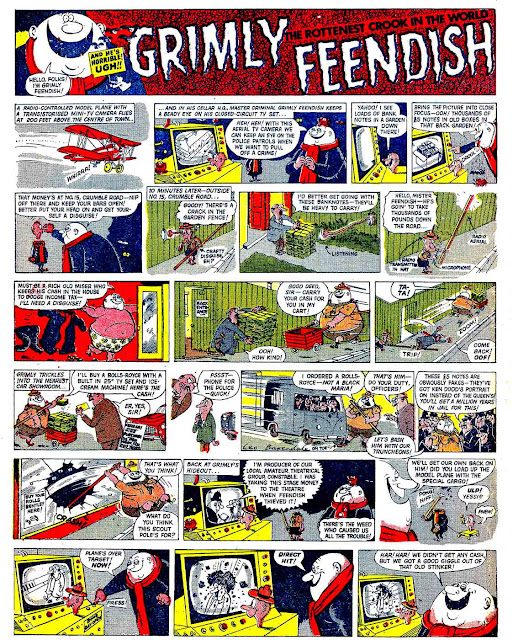 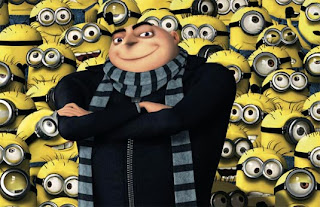 Posted by Shithead at 8:47 AM No comments:

Some while ago I mentioned an incident in the Left Behind Series, from book four:

"Newscasters told the story of what astronomers had discovered just two hours
before—a brand-new comet on a collision course with Earth. Global Community
scientists analyzed data transmitted from hastily launched probes that circled the
object. They said meteor was the wrong term for the hurtling rock formation, which
was the consistency of chalk or perhaps sandstone.
Pictures from the probes showed an irregularly shaped projectile, light in color. The
anchorman reported, “Ladies and gentlemen, I urge you to put this in perspective.
This object is about to enter Earth's atmosphere. Scientists have not determined its makeup, but if—as it appears—it is less dense than granite, the friction resulting from entry will make it burst into flames.
“Once subject to Earth's gravitational pull, it will accelerate at thirty-two feet per
second squared. As you can see from these pictures, it is immense. But until you
realize its size, you cannot fathom the potential destruction on the way. GC
astronomers estimate it at no less than the mass of the entire Appalachian Mountain
range. It has the potential to split the earth or to knock it from its orbit.
“The Global Community Aeronautics and Space Administration projects the
collision at approximately 9:00 A.M. Central Standard Time. They anticipate the
best possible scenario, that it will take place in the middle of the Atlantic Ocean.
“Tidal waves are expected to engulf coasts on both sides of the Atlantic for up to
fifty miles inland. Coastal areas are being evacuated as we speak. Crews of
oceangoing vessels are being plucked from their ships by helicopters, though it is
unknown how many can be moved to safety in time. Experts agree the impact on
marine life will be inestimable."

That's from Revelations 8.8, The second angel sounded his trumpet, and something like a huge mountain, all ablaze, was thrown into the sea. A third of the sea turned into blood, a third of the living creatures in the sea died, and a third of the ships were destroyed.
I was reading a Phil Plait ("Bad Astronomy") post that was referring to a paper attempting to quantify the physics in the Bruce Willis film Armageddon, where an asteroid the size of Texas is going to hit the Earth, and was for no very good reason moved to try and get quantificationist with LB. My first attempt, based on this passage, was a very rough attempt to quantify the mass of the Appalachians, based on
- an area of 2,400 * 160 k – counting out foothills, to be conservative, 2000* 150 -
- one perfectly conical peak of 500m to every square K, giving 300,000 peaks – that is, counting down to sea level rather than through to the centre of the earth -
the two together giving volume, and
- a figure nicked from a site on "what's the weight of a mountain" for density, 2700 k per cubic metre – assuming granite (seems a bit high) coming up with a figure of 106,018,149,183,450 or 106 trillion tonnes.
The Chichulub event was 10 k across, or and if you assume it was half the density of granite that makes it about 706,858,347,058 tonnes, so the LB Appalachians are about 150 times that, or some 15,000 teratons of TNT.
The authors are even overreaching themselves - they could have got away with one mountain, not an entire range.
A few pages on, however, they up the ante further; the book says that
“The more than thousand-mile-square mountain, finally determined to consist largely of sulphur…. Created hurricane-force winds for the last hour it dropped from the heavens.”
Leaving aside that last hour bit (in which the impactor would have travelled some 360,000 k; it would have been in the wind belt for less than a second)  that thousand-mile-square thing is a problem, in that meteors aren’t round and are cubic.  Does that mean a diameter of 1000 miles, a face of 1000 square miles, or a typo for 1000 cu/m? let’s take the last; that would make the mass 8,628,136,388,100 Tonnes, or another twelve times larger. That’s a species-ending whack.
And all that happens in the books is waterspouts a mile high and that “Damage inland was so extensive that nearly all modes of travel were interrupted.” Yes, even fifty-mile-inland tidal waves would do that, let alone something 1,800 times the impact that took out the dinosaurs.
And then La Haye and Jenkins move on to more important stuff.  They really don’t do special effects terribly well.
Why do I waste my time on these things?  Displacement activity.