Age, as it were, bin 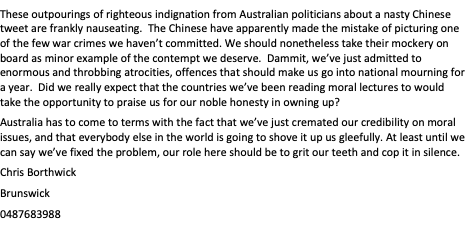 Posted by Shithead at 9:23 AM No comments:

If in any doubt that Mr. Justice Kirby was a fine man, see his impeccable politeness to a contentious litigant here

Posted by Shithead at 4:15 PM No comments:

Sitting at the bus stop today I was humming Joplin's 'Mercedes Benz' and I realised for the first time since hearing it in 1965 (also my introduction to Robert Crumb's art, actually) that the line was not

If the half-billion dollars that is to be spent on extensions to the Australian War Memorial were to be spent on good history, it might conceivably be worth paying. It won’t be.  It will be used to sell the same message as the current displays; that the Australian army was both heroic and virtuous, and that war brings out the best in us.

No presentation of our engagements in two world wars and after can be taken seriously that does not include any reference to the Battle of Brisbane (where diggers fought GIs), the Battle of the Wazza (where the diggers burned down part of Cairo), or the massacre of Sarafand (where the Anzacs killed forty civilians and burned down a Palestinian village).

In every war we’ve ever fought, from the Boer War and Breaker Morant to Afghanistan, Australians have been notorious for killing their prisoners. My grandfather’s letters from Gallipoli refer to it unashamedly.  No Australian has ever been prosecuted (by Australians, at least) for war crimes.  If the AWM shows us got a wall of VCs, it also needs to show us the other side of the picture.

The message – the only message - of the War Memorial needs to be General Sherman’s: war is cruelty, and you cannot refine it.  When we send our soldiers out to fight, we take that responsibility on ourselves.  We need to know precisely what it means.

Posted by Shithead at 3:44 PM No comments:

The last time Native life seemed on the brink of apocalypse, at the end of the 19th century, the Indians were also dancing. They called it the Ghost Dance. It foretold a world in which the colonists disappeared, the buffalo returned, and the land was restored to the people.

That spiritual movement ended on December 29, 1890, when the United States military gunned down hundreds of Lakota ghost dancers and buried their bodies in a mass grave. A week after the massacre, L. Frank Baum, who later wrote The Wonderful Wizard of Oz, penned an editorial in the Aberdeen Saturday Pioneer. “Our only safety depends upon the total extermination of the Indians,” he wrote. “Having wronged them for centuries we had better, in order to protect our civilization, follow it up by one more wrong and wipe these untamed and untamable creatures from the face of the earth.”

Posted by Shithead at 8:46 PM No comments:

There are other accounts of downright cruelty - even war crimes - committed by Australians against the enemy. The British officer Robert Graves quotes (in Goodbye to all that, 1929) an anonymous Australian who told him: 'Well the biggest lark I had was at Morlancourt, when we took it the first time. There were a lot of Jerries in a cellar, and I said to 'em: "Come out, you Camarades!" So out they came, a dozen of 'em, with their hands up. "Turn out your pockets," I told 'em. They turned 'em out. Watches and gold and stuff, all dinkum. Then I said: "Now back to your cellar, you sons of bitches!" For I couldn't be bothered with 'em. When they were all safely down I threw half a dozen Mills bombs in after 'em. I'd got the stuff all right, and we weren't taking prisoners that day.'
Posted by Shithead at 12:13 PM No comments:

‘Acnestis’: the part of the back (or backbone) between the shoulder blades and the loins which an animal cannot reach to scratch
(Oxford English Dictionary, 3rd ed.)

I wish I'd known that earlier in life.
Posted by Shithead at 11:00 AM 1 comment: